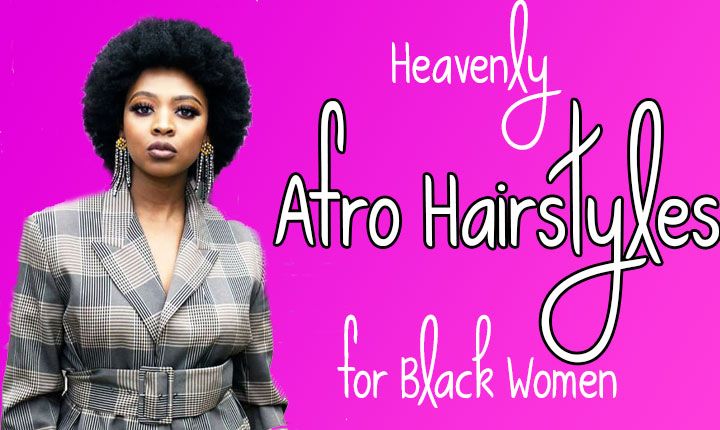 African American People Naturally wear African Hairstyles. Afro hairstyles are being worn for years for legendary and iconic looks by people of different social status, gender, and region. Among them, the African American men and women wear these hairdos for getting a versatile and classic look. It is one of the most flexible hairstyles of black people. Within half an hour you can turn your Afro hair into braided, wavy, curly or many other hairstyles. On the other hand, the Afro hairdos are great for almost all seasons. Specially It brings great relaxation during the summer seasons.

For your inspiration, we have brought 27 iconic and glorious Afro natural hairstyles for you women. We have proved many times before that we African American women are the best fit for using these hairstyles at home and out of the home. Let’s enjoy the series of them now.

Get Fun with Bun of Afro Hairstyles

Aristocratic these hairstyles are. The politicians, models, celebrities, and people of other walks of life love the bun hairstyles as they are one of the classic and decorous hairstyles used by black women. Among many of the bun hairdos, the Afro is the comely and civilized hairstyle. These buns have a wide range of variations in terms of color, design, and texture. As a result, every design and model has the superpower to give hot and angelic beauty to anyone.

Some of our African American Women crave for long hairstyles. And the long hairdos with the Afro hair is one of the most used and popular to them. You know, the long hair generally falls behind the shoulder and the radius of the hairstyles also becomes increased. The Long Afro hairstyles are easy to wear and low maintenance hairdos for which the working women love them most. These hairstyles can create a lovely and perpetual enchantment to your hairstyle and appearance just like the models in the pictures.

Braided Afro for the Smart Women

As stated before, the Afro hair is flexible and versatile. You can use them as braided hairstyles just like the hairstyles in the images below. You can create lovely braids with Afro hair on any position of the head. These models are wearing their braids on the front part of the head and by the side of the head. Among most of the combined hairstyles for the African American hairstyles, the braids and the Afro have the most gorgeous and glamorous combination. And the proof is just in front of you.

Crazy Mohawk to have Wild Look

Afro Mohawks is a crazy and hot hairstyle used by black women (especially young women) as a recent trend. These Mohawks are simply provocative, feminine and romantic hairstyles for them. It has some magnetic power to draw anyone closer with the magic spell of it. This side faded or the side shaved hairstyles is really a providential and miraculous hairstyle to them.

Afro Updo You Never will Undo

You know,  how we crave for the updo hairstyles. The updos are simply royal, marvelous and extraordinary. The Afro updo can be one of the best hairstyles you have ever worn. Apart from remarkable beauty and effect, these updos can make you more relaxed and comfortable during the summer. From, casual to formal, these hairstyles are perfect for everywhere and every occasion. You will see wide use of these updos in another ethnic group of people too just because of these unique characteristics.

During the wedding, the bride must look like an angel. So, the brides are wearing a large number of hairstyles with a variety of accessories to make themselves more attractive and more glamorous. The use of Afro hair and hairstyles are also seen significantly during the African American wedding. You will get a lot of hairstyles for the black wedding on the internet and likewise, we have got these for you for your wedding.

Ponytails with Afro hair are basically puffy ponytails made with Afro hair for the African American black women. These hairstyles are neat and clean hairstyles used for both casual and formal purposes. Going to attend a social program? Or going for a vacation? Don’t worry you have this great option left. As these ponytails are simply gorgeous, you can play around with them to make various versions and variations of them. Especially, middle-aged black women are much fond of these ponytails for multiple purposes.

From designing a cloth to a hairstyle, the crochets are unavoidable. So, The Afro hair is deserved for making shiny and juicy crochet hairdos just like the images below. Here the hair texture is combined with Afro hairstyle and the curly crochet hairdos. And you judge the effect of these hairstyles. Going for a date? Why worry, a crochet Afro can really make your day.

We have provided some updo for you on the top of the page. But here are some more. As the updo hairstyles with the Afro hair is a widely popular and most used hairstyle, we have to give you some extra. When you will wear one of them you will really look like a queen. And a queen never compromises with her hairstyle.

Well, we cannot simply explain Afro with some words or examples. These legendary and iconic hairstyles are far more than that. But we have tried to pick the best and trendies ones for your next hairstyle. If you pick any one of these recommended hairstyles, by you as your next hairstyle, we will be really honored and joyous.

So, pick one and the rest of the job will be done by the nearby saloon of you. If you like this article please leave a comment and share this on social media to support our voluntary labor.

The Coolest and Cutest Cornrows to Wear in 2023

Haircuts for Black Boys and Men

Our Picks from Amazon.Com